John Little, T/A Little Enterprises Ireland has been in the Christmas tree business since 1995, selling and marketing Irish grown Christmas Trees to the European and Irish markets. Starting in 2003, John planted his own crops at his home in Co. Carlow.

In 2009 a crop of Christmas trees was planted at Lorum, Co. Carlow and in Spring of 2020 this field was returned to agriculture having first produced a crop of Phacelia flowers for the Honeybees and other pollinating insects ……

In 2011, due to satisfied customers and increasing sales, John in cooperation with brother-in-law Christy and his nephew Peter increased the acreage of land planted with trees. We now have a selection of plantings and varieties of the most popular Christmas trees, including Nordmann Fir, Noble Fir, Fraser Fir and some Korean Fir.

Our Native Irish Honeybees are predominately residing in Counties Carlow and Wicklow with ever more of them also residing on and near the farm on the outskirts of Cork city. John is a member of NIHBS ( www.nihbs.org) FIBKA (www.irishbeekeeping.ie) and IBA (www.irishbeekeepersassociation.com) We endeavour to keep and promote only native, Apis mellifera mellifera (Amm) honey bees.

Ireland has proven itself to be a world class leader in growing and production of top class Christmas trees for the national and international markets. Little Enterprises Ireland are proud to be an active member of the Irish Christmas Tree Growers (ICTG) group. As active members we support each other throughout the year encouraging each other to maintain our high standards as we grow your Christmas trees every year. John has been on the committee of the ICTG for the past number of years and has been active in the promotion of the LOVE A REAL TREE Campaign.

John Little (Little Enterprises Ireland) has a good working relationship with many of his colleagues within the Irish Christmas Tree Growers (ICTG) and is in a position to source trees from his colleagues should some trees be needed that are not available on his own farm.

As a group the ICTG use the ‘Love a real tree’ brand, helping us to promote the true values of Christmas trees, i.e.  they are natural, sustainable, traditional and renewable. When you buy a Christmas tree from any of our farms, you can be guaranteed that you are buying an excellent and sustainably produced product. 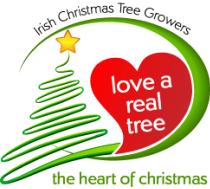